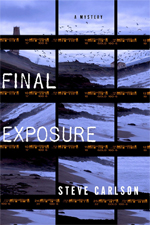 The future looked great for David and Rebecca Collier as they changed into more creative careers and moved to a beach house North of San Francisco. He was to pursue his dream of writing and she, her photography. Everything got off to a wonderful start until horrible events altered things forever.

A group of these pictures, however, shed a dangerous light on it all. Activity was seen around one of these old mansions, para-military activity. We also noticed that the photographer (Rebecca, presumably) was seen by these militants and that they were not pleased. What did the militants think had been discovered? No one seemed to know, but that didnt stop them from trying to kill anyone even remotely close to the mansion or the pictures. Struggling to stay alive while also attempting to figure out what was really going on, proved to be a difficult and harrowing undertaking. Along the way, David was wounded severely, would never walk without a limp and found himself at the mercy of a rather temperamental hearing aid.

A climactic stalk through the beach house at night finally brought David face-to-face with the long-sought killer and discovered the extraordinary events he was putting in place and the equally surprising motive behind it all.