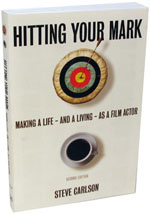 HITTING YOUR MARK , Second Edition
Making a Life - and a Living - as a Film Actor

The first edition of Hitting Your Mark was subtitled, 'What every actor really needs to know on a Hollywood Set.'  It dealt with the problem that virtually all actors are trained on stage. There's very little opportunity to get to know and understand the workings of a film set until they are already shooting something. Of course, they are already in the belly-of-the-beast by then. The first book did a good job in letting the actor know what to expect… and what's expected of them.

The second edition, as you see, deals also with the life of an actor. The technical information from the first book is still there but here we get into the intellectual and emotional sides of acting for a living. How far can you go? How good can you get? How do you deal with rejection and lack of security? How do you prepare to give yourself the best chance of success and actually enjoy yourself along the way? … and much more.

Purchase this title from the publisher by clicking here.

"An absolute must for the library of any beginning actor, seasoned pro, or cinema buff. Hitting Your Mark is the perfect blend of humor, technical tips, and insider information from a real show biz pro. You'll laugh and learn a great deal from this book!!!"

“As a Director of Photography, my life is made considerably easier when dealing with actors who know about the workings of a film set. Steve Carlson's book, "Hitting Your Mark" supplies much needed information to the new film actor. Most actors pick up a working knowledge of the film set over years of working on it. Steve Carlson's book has shortened that learning curve considerably. The actor, crew and the final film all benefit from this knowledge”.

"Steve Carlson's book offers a complete, no-nonsense approach to learning the ins and outs of television and film technique from the actor's point of view. It should be required reading for anyone beginning a career in this field."

John C. Zak
Supervising Producer
The Bold and the Beautiful

"I so appreciate, as my students will, the solid coaching and positive approach combined with a realistic appraisal of the actor's life when working and when preparing to work. The sense of humor makes it most appealing and readable, and the depth and breadth of experience makes its content extremely valuable."

"Hitting Your Mark is the only source I know of for an actor to learn about the set and filming process from an actor's point of view. A very needed addition to the new film actor's library."